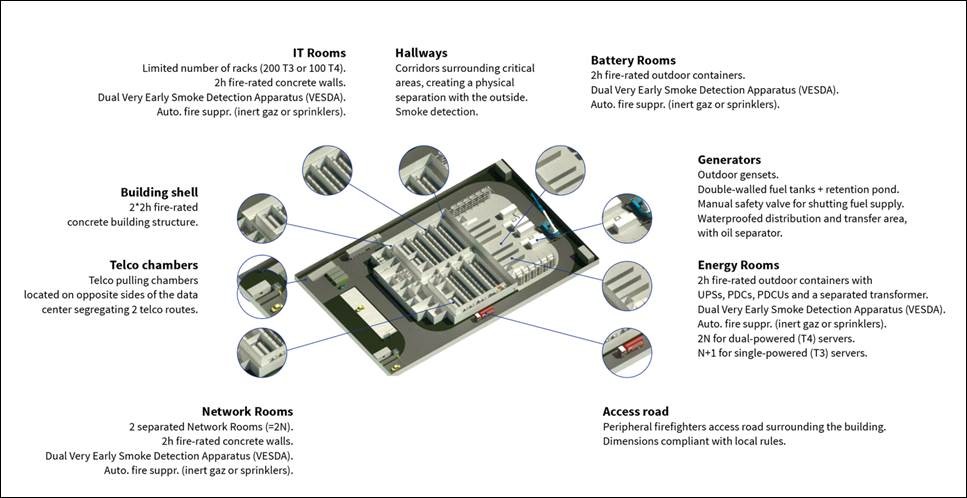 OVHcloud unveils its latest generation of hyper-resilient and sustainable datacentres

During this event, held in presence of the Minister of Economy, Finance and Industrial and Digital Sovereignty, Bruno Le Maire, the Minister Delegate for the Digital Transition and Telecommunications Jean-Noël Barrot, the European Commissioner for Internal Market, Thierry Breton, as well as representatives from local authorities and the French Cloud industry, the group unveiled the breadth of innovations coming from its hyper-resilience plan as well as the measures deployed to significantly reduce the environmental footprint of its infrastructures. As part of its strategic plan, OVHcloud confirms the opening of 15 sites by 2024, to provide its customers with innovative IaaS and PaaS solutions in a trusted and sustainable framework. This ambitious industrial policy will enable the Group to expand existing sites, conquer new geographies, and also address new use cases through a hyper-resilient and sustainable model.

"In a booming market, OVHcloud stands out for its ability to deploy innovative solutions with the best price-performance ratio, all the while meeting the highest security standards and deploying a model that respects our environmental challenges. The opening of SBG5 is a strong symbol of this industrial strategy, which allows us to champion the European values of an open, trusted, and sustainable cloud, and this, to our customers around the world. Our local anchorage and our constant investment in the territories allow us to strengthen our position in the employment areas to bring in new skills ", said Michel Paulin, CEO OVHcloud.

Bruno Le Maire and Jean-Noël Barrot declared "The opening of this new datacentre, which is less energy-consuming, marks an essential step in the development of OVHcloud. Thus, the company positions itself at the heart of the French and European digital sovereignty the Government has been helping to build since 2017. It demonstrates the resilience and innovation of the French cloud ecosystem and bolsters the choice that France has made to retain full control over its data."

SBG5 is the first datacentre which design comes from the hyper-resilience plan laid out as early as April 2021, and representing an investment of 30 million Euros. The site, with a surface of 1 700 m2, counts 19 isolated rooms benefiting from masonry to compartmentalize segments offering a fire resistance of up to two hours. The gas fire extinguishing system is rated APSAD R13 and VESDA smoke detection is rated APSAD R7. The 7 energy rooms and 3 battery rooms are located outside of the building.

In line with its commitments, the Group will launch a new datacentre dedicated to raw data backups (snapshots), located remotely from service operating sites. First deployed for French customers, the Group intends to extend this service to cover its entire range of solutions and locations.

In addition to this remote storage solution, OVHcloud provides a variety of services to facilitate backup and disaster recovery, such as Veeam Enterprise for securing business via the backup of strategic workloads (VMWare, physical Windows/Linux servers or NAS), and Zerto for the backup and restoration of virtual machines as part of disaster recovery plans on Hosted Private Cloud infrastructures.

Finally, OVHcloud will launch a new storage service in November 2022 - Cold Archive - a hyper-resilient solution at a very competitive price. This service will allow businesses to store so-called "cold data" in the long run, while benefiting from maximum security and reliability.

The service is based on:

4 mini datacenters spread across France with at least 200km of distance between sites. With each site being interconnected, a permanent level of backup is guaranteed with redundancy mechanisms, whatever the situation is.

A resilient tape-based archives solution, developed in partnership with IBM and Atempo. This solution will be marketed as soon as November 2022 to provide customers with an ultra-secure storage solution for the very long term.

Deploying the most sustainable model on the market

With a view to reducing its environmental impact, the SBG5 site benefits from the principles of frugality and efficiency refined by OVHcloud for over 20 years, especially its watercooling system for server components that participates in a water usage effectiveness (WUE) ratio below 0.2l/kWh, i.e. the equivalent of a glass of water to cool down a server during 10 hours of use. While the Cloud industry average WUE reaches 1,8l/kWh[1], OVHcloud stands out thanks to its closed-circuit system that limits fluids waste, but also thanks to the use of dry coolers, and the absence of air conditioning in its servers’ rooms.

These innovations enable the Group to reach a power usage effectiveness (PUE) index ranging from 1,1 to 1,2, 36% lower than the 1,57[2] industry average according to 2021 estimations. By deploying a model that participates in reducing the energy consumed by cooling systems and fans, OVHcloud is one step ahead of the industry’s commitments towards the European Commission. This whole set of environmental requirements meets the highest expectations from the market and will pave the way for all the upcoming installations from the Group.

Thanks to its factories located in Croix, France, and Beauharnois, Canada, OVHcloud has total control over the design and production of its servers, benefiting from significant advantages in terms of innovation, competitiveness, and resilience. With this vertically integrated model, OVHcloud enjoys short, circular manufacturing circuits. French Regulatory Authority ARCEP, and French Agency for Ecological Transition, ADEME, both estimate that 78% of the Cloud carbon footprint comes from manufacturing of hardware[3]. OVHcloud’s ability to refurbish and dismantle 100% of its components results in extending their lifecycle for constant innovation. The Group is maintaining its efforts to optimise the use of resources and to better control the environmental impacts of its activities on the entire value chain, particularly in scope 3.

Growing and strengthening its global footprint

With the opening of SBG5 datacenter, OVHcloud confirms the deployment of the industrial pillar of its growth acceleration plan. This comprises the expansion of existing sites, but also new sites and new countries:

A tenth datacentre (RBX10) will be added to Roubaix’s campus

In Gravelines, OVHcloud will deploy new capacities with GRA4

In Germany, Limburg’s Campus will see the opening of LIM4 in Q3 2023 to support local growth, while a new remote site will be launched for opening in 2024

As a result of the strong growth in North America, the Group plans to expand the Beauharnois campus with its ninth datacentre (BHS9) and to open a new datacentre in Toronto in 2023

In Asia, which is also a fast-growing region for OVHcloud, the Group will deploy its first datacentre in India, in Mumbai, before the end of the year, as well as a second datacentre in Singapore in 2023.

Leaseweb Global has published the results of research revealing that over half (55%) of UK IT professionals currently trust public cloud services less than they did two years ago, having run into challenges around usage costs, migration and customer service.

Nearly three-quarters of CIOs say the explosion of data produced by cloud-native technology stacks is beyond human ability to manage.

The education sector is 11 per cent more likely to face account compromise attacks as the other industries surveyed.